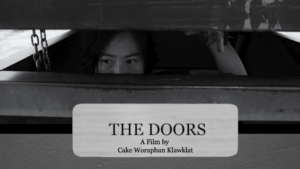 A solitary woman unlocks her fear by opening the door.

I did not come to Nepal to make this film, nor did I intend to make this film when it began. I had been living in Kathmandu for over four years, working on my undergrad thesis film project, but after the devastating earthquake of 2015, the film was put on hold, and I was struggling to make ends meet as a freelancer in the city. My longtime friend Suraj Mainali approached me to help edit a screenplay for his new production company’s first feature, a mainstream commercial movie called ‘Being Devkota.’ I began meeting daily with the team to see how we could improve the script.

Coming from an experimental background with no experience in south Asian commercial cinema, my natural instinct was to suggest removing anything I felt to be contrived and to search for whatever truth could be found in the material. I was hesitant with my suggestions initially; the film already had funding based on its commercial viability, and I did not want to put my friend out of business just because of my artistic vision. But instead of discouraging me, Suraj and the team embraced the new direction the script was taking, and we began a months-long deconstruction of the story. After stripping away almost every recognizable element of the original story, exciting themes began to reveal themselves; repressed trauma, hidden anxieties, the ‘age of paranoia.’

Perhaps it was that we had all just survived an earthquake and a year of relentless aftershocks. Or maybe it was the prolonged and crippling petrol blockade that followed, where both India and Nepal blamed each other publicly, and nobody, including international news media, could give a corroborating report on what was going on. Moreover, my co-writers had been living through more than two decades of political instability, which included their royal family being slaughtered under mysterious circumstances and a full-on civil war; an ongoing situation where even after a peace agreement, public bombings are commonplace, corruption is rampant, and the future remains highly uncertain. Regardless of where we were born, we had all grown up in the murky landscape of the internet, where the rise in both free information and conspiracy theory had left us all endlessly suspicious and increasingly apprehensive of the world around us. This gestation of anxiety and paranoia eventually gave birth to our film ‘BASENJI.’

As for the style of the film, I wanted to submerge the audience in this mirth of uncertainty as effectively as possible. Having the camera be a neutral observer force the audience to actively question everything they see, struggle to come to their own conclusions as the story unfolds, only to be utterly dumbfounded at every turn. In this way, the experience of watching the film mimics the everyday struggle of being ‘au courant’ in an unreliable and increasingly volatile modern media landscape.

To this end, I opted for a simple alternating first and third-person perspective, a method which until now is primarily used in video games, which allows the viewer to both ‘be’ and observe the protagonist without ever feeling omniscient to the story. The first-person portions were shot using a self-made camera head mount and were carefully planned out not only in terms of composition and mise en scene etc.. but to reveal the character through the nuances of his gaze. As for the third-person portions, all shots were done with a gimbal, and all camera placement was restricted to a rigid orbit of the protagonist. Cutting was only reserved for alternating between these perspectives or for moving forward in time. There are no establishing shots, no wide shots, no cutting to close-ups. Having these restrictions on the perspective allows the audience to be fully and actively immersed in the reality of film without the only subconscious interference inherent to standard narrative filmmaking techniques.

As an artist, I believe our main duty is to challenge audiences in both content and form, open minds with our expression, and contribute positively and effectively to the ongoing public discourse. ‘Basenji’ is our most earnest and wholehearted attempt at achieving this, and we hope audiences around the world will have the chance to engage with and enjoy what we have created. Thank you and Namaste from the entire ‘Basenji’ team.

Ian Scott Clement is a 33-year-old writer/director/editor based in Kathmandu, living and working in the city for over 8 years. Hailing from a small town in New Hampshire, Ian got his start making films as a teenager, getting together with friends on weekends to shoot short movies to compete in his high school’s annual film festival. In 2006 he moved to Boston to begin enrollment at the Massachusetts College of Art with a major in film/video. Being a notoriously avant-garde centered film program, Ian spent the bulk of his education exploring the works of filmmakers like Stan Brakhage and Phil Solomon, attending artist talks, and frequenting the renowned Brattle art-house theater. In 2008 he took a semester off to travel with his high school best friend Viraj Thapa to his hometown of Kathmandu. Here he spent three months traveling around Nepal, making friends with the locals and immersing himself in the vibrant contemporary culture of the city. In 2010 he returned to Nepal to begin shooting his thesis project ‘Mango Pickle,’ a gritty post-war youth-based narrative with the help of his close group of Nepali friends. After traveling back and forth to Nepal multiple times for re-shoots and dubbing, in 2014, he moved back to Kathmandu to finish the post-production. In the spring of 2015, Nepal was hit with a massive earthquake, halting the film’s completion, and Ian took part in a number of grass routes relief efforts to bring aid to devastated communities around the valley. In 2016 he teamed up with longtime friends and collaborators Suraj Mainali and Gourav Basnet to co-found Gaurishankar Entertainment, an independent film production house. He began writing their first feature film, ‘Basenji.’ Wrapping their production in 2020, ‘Basenji’ will be Ian’s feature film debut. Apart from directing films, Ian is a fixture in Nepal’s flourishing hip hop community and has made a number of music videos for the top emcees in the country.