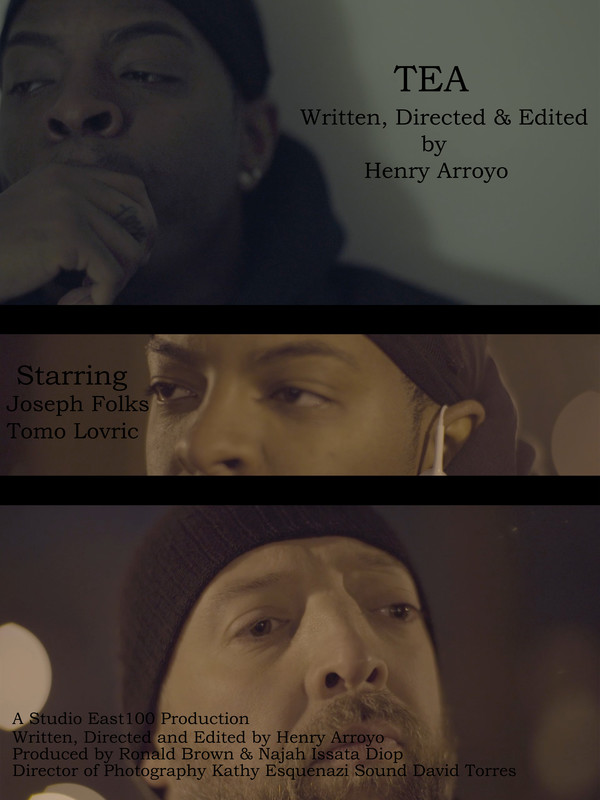 Tea tells the story of an African American man who, upon realizing that he has run out of tea to soothe his cold, goes out into the streets of New York to buy some more. On his way back home, he is stopped and searched by an undercover officer who accuses him of “looking familiar.” Tea is a story about the different lengths of police harassment and though physical violence may not be used, emotional violence is still a deeply destructive tool used within society.

This film was made as a response to the ongoing police brutality issues that had been and still is rising in America. After thinking about what we wanted to say in this film in response to these issues, we did not want to make a film about tragic physical violence on African American people. In making this film we wanted to portray the other, more subtle, ways that police harassment can be used on people of color. Though the film ends in an emotional conclusion, there is the word “Love” tattooed on the finger of Joseph, the main character, as he tries his hardest to hold back his tears. Though the tragedy of police harassment is clear, it must be said that the answer to many of our problems is the use of Love.

Henry Arroyo is a Filmmaker based in Queens, New York. He received his BFA degree in Film from LIU Post and His MFA in Screenwriting from Columbia University. His artistic practice consists of Writing, Directing and Editing narrative and documentary films of different lengths to be exhibited to audiences through film festivals and distribution through local theaters and online resources. Henry makes work to positively impact the mindsets of audiences by giving them the experience of living another life through entertaining, character driven, emotional stories that push the boundaries of genre and artistic avant-garde storytelling practices and techniques. His film “Tea” was selected to screen at the New York Independent Film Festival, Harlem International Film Festival and the Queens World Film Festival in 2021. His film “A Wall Between Two Love Birds” premiered in 2019 at the Queens Underground Film Festival and then screened again in 2020 at the Newark International Film Festival. In 2020 his film “Beauty” premiered at the Blow-Up Art House International Film Festival.