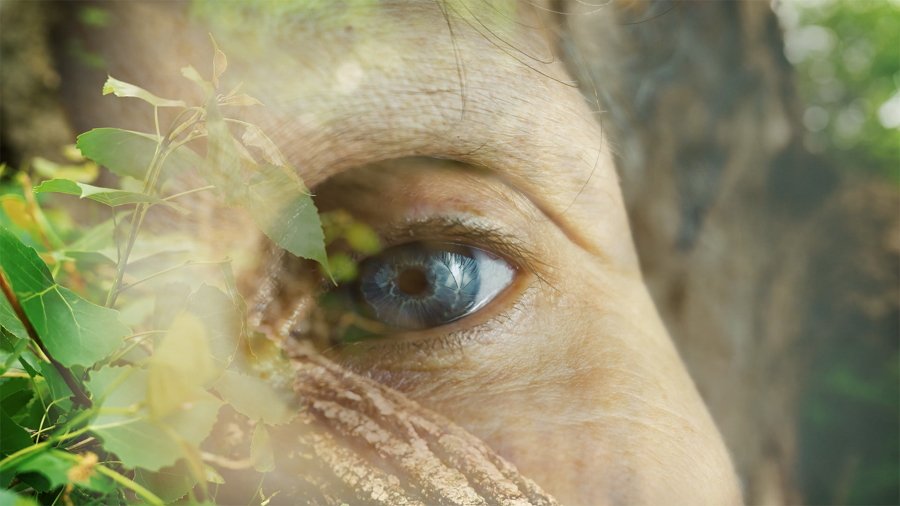 Synopsis
The first 72 hours after a hereditary breast cancer diagnosis are depicted through a tense montage of sound juxtaposed with close-ups of gestural expression and contrasting images of the natural world. One of the nine emotions (navarasas) described in an ancient Indian text on drama, “karuna” is the rasa of anguish and despair. The layered soundscape is comprised of phone calls and conversations with family and medical practitioners documented by the filmmaker while navigating the overwhelming information in the days immediately following the news. Imagery alternates between restless and beatific, the latter offering momentary glimpses of calm at the center of chaos.

Director
Cherie Sampson has worked for over 25 years as an interdisciplinary artist in environmental performance, sculpture and video art. Her work has been exhibited internationally in live performances, art-in-nature symposia, video/film screenings and installations in the US, Finland, Norway, Holland, Cuba, France, Greece, Italy, India, Spain, Argentina, South Korea, Hong Kong and other countries. Sampson is the recipient of a number of fellowships & grants including two Fulbright Fellowships to Finland (1998 & 2011), a Finnish Cultural Foundation Grant (North Karelia Fund), three Finlandia Foundation Grants and multiple internal research grants for artistic projects from the University of Missouri. She is an Associate Professor of Art in the School of Visual Studies (SVS) at the University of Missouri, where she teaches video art, digital storytelling and performance. She divides her time between Columbia, Missouri, her husband’s organic farm in NE Missouri and travel for exhibitions and performances. Sampson received a Master of Fine Art Degree in Intermedia & Video Art from the University of Iowa in 1997 with a minor in Sculpture. Currently, she serves as President of Artists in Nature International Network (AiNIN).

The experimental documentary short “every.single.one (karuna)” is part of a series of artistic works including short films, video installations and live performances I have created navigating and portraying an experience with hereditary breast cancer. I was diagnosed and treated in 2017 and documented the experience, collecting audio, video, photographic material as well as medical scans and other records. The documentary material contains the essence of the film and live performance narratives as well as creates an immersive audio-visual space in which the expressive storytelling through movement & spoken word is interwoven in the live performance setting. Creating the “every.single.one” project has been a healing process in itself, allowing me to reflect on the cancer experience and in the words of feminist poet Audre Lorde, “examine it, put it into perspective, share it and make use of it.”