Screening Event: In the Soup with Alexandre Rockwell 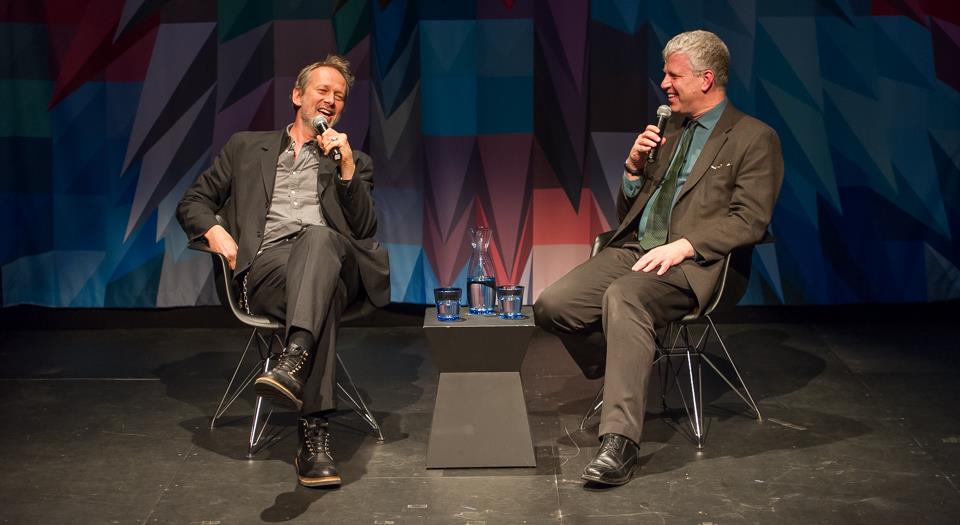 Museum of the Moving Image

Presented in partnership
with
Museum of the Moving Image

A neurotic nebbish lives in 2 worlds: the fantasy of winning his dream-girl via a hit movie, and the meager existence he scrapes out from very odd jobs, such as thesping in an arty no-budget flick. His beautiful object is his next-door neighbor Angelica, who’s understandably preoccupied with her own life, as an illegal immigrant and single mom. Aldolpho Rollo’s writing his unending masterpiece screenplay from a walk-up NYC flat, in-between peering at debtors through his peephole. AR’s hopes to win her love take wing via another angel, a shady high-roller who definitely has the self-confidence, and promises the cash Aldolpho craves, to produce the auteur’s vision.

About In the Soup

This endearing, grungy indie comedy about the misadventures of hapless would-be filmmaker Adolpho Rollo perfectly captures a seedy New York just before the onset of Giuliani-era gentrification. Buscemi is at his nebbishy best, though the film is stolen by Seymour Cassel, as a shameless but charismatic con man who promises to produce Rollo’s movie. In the Soup has the vitality, humor, warmth, and cinematic playfulness that characterize the work of the great and under-appreciated filmmaker Alexandre Rockwell. However we came dangerously close to losing this gem forever.

In the Soup won the Grand Jury Prize at the 1992 Sundance Film Festival and premiered to critical acclaim, receiving rave reviews in the New York Times, Rolling Stone, and Newsweek. However, in 2014, independent film distributor Matt Grady learned that the film was badly damaged and in danger of disappearing. In 2017, Grady launched a Kickstarter campaign to restore the damaged print and host a screening of In the Soup to mark the film’s twenty-fifth anniversary. With the help of nearly 800 backers, the 25th-Anniversary restoration was made possible by IndieCollect and Factory 25.

Mr. Rockwell has transformed his potentially myopic subject into a wild grab bag of offbeat characters and deadpan comic effects, and in the process made a dryly funny film of exceptional visual beauty. .
-Janet Maslin, New York Times

“You absolutely must see ‘In the Soup‘…I’ll give you your money back if you don’t love this movie.”
-Seymour Cassel

MoMI Chief Curator David Schwartz left his position at Museum of the Moving Image on November 30, 2018, stepping down after a 33-year tenure at the Museum that began with an internship in 1985. During his time with the Museum Schwartz has supervised more than 10,000 film screenings, many with personal appearances, and has played a key role in numerous exhibitions and online projects. In 2006, he won a Film Heritage Award from the National Society of Film Critics for organizing the first complete Jacques Rivette retrospective in the United States.

“David’s contribution to the Museum has been incalculable,” said MoMI Executive Director Carl Goodman. “He developed a film program that is respected around the world. His screening programs and live events and his work on exhibitions helped put the Museum on the map as a major international institution. We greatly look forward to working with him as a guest curator in the future.”

“MoMI has been the center of my professional life for nearly my entire career,” said Schwartz. “It has been tremendously gratifying to be able to play a substantial role in its growth and success. I am comforted to know that the film and media programs will be in good hands under the direction of my gifted colleague Eric Hynes, Curator of Film.”

Schwartz is the curator of The Living Room Candidate: Presidential Campaign Commercials 1952-2016 , an online archive of campaign commercials that is used regularly by thousands of educators around the world. He has also supervised the Museum’s online projects Moving Image Source, Reverse Shot, and Sloan Science and Film.
Schwartz teaches film history in the Graduate Production program at NYU Tisch School of the Arts, and he hosts the Westchester Cinema Club, the Cinema Arts Centre Preview Club, and the Emelin Theater Film Club. He continues to moderate panels and discussions with filmmakers around New York City.