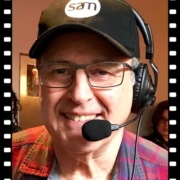 Sam Berland has worked with QWFF since the start of the festival and is the lead projectionist. He is a quality control expert on AV equipment and has worked in the film/video and broadcasting industry for many years. He builds all film playlists and is the one to call if you want your film to look and sound the way you intended! Sam’s newest venture is working as a Freelance TD/Projectionist on David Krakauer’s Big Picture tour, traveling around the US and Europe and works a Freelance Video Projectionist on the Tribeca Film Festival. He is the Co-Owner of Play It Again Sam’s Video Productions. Sam also works as a part time Imax/3D Digital Projectionist at The American Museum of Natural History. As an artist, Sam’s artwork has appeared in both fiction and non-fiction books, and he has often been commissioned to create caricatures of TV newscasters and sports personalities. His work has also appeared on children’s clothing, album covers, as well as prominent public murals.