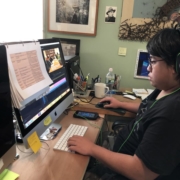 Born in Indonesia, he moved to Queens, New York in 2012 and currently is a junior in Queens College. He found his passion for editing, filmmaking and animation when he enrolled in the video program at Information Technology High School. Evan attended a QWFF Encore Screening in 2015 and signed up to volunteer and now he is a QWFF Media Technician and Editor working closely with Don Cato (QWFF Artistic Director) tracking the festival media elements, multiple drives and screening programs. He also works closely with the QWFF Projectionists to prepare the accepted films for their festival screening. Evan also assists with other editing duties on sizzle reels, PSA’s, promotional videos and the films created in the Young Filmmakers Program.