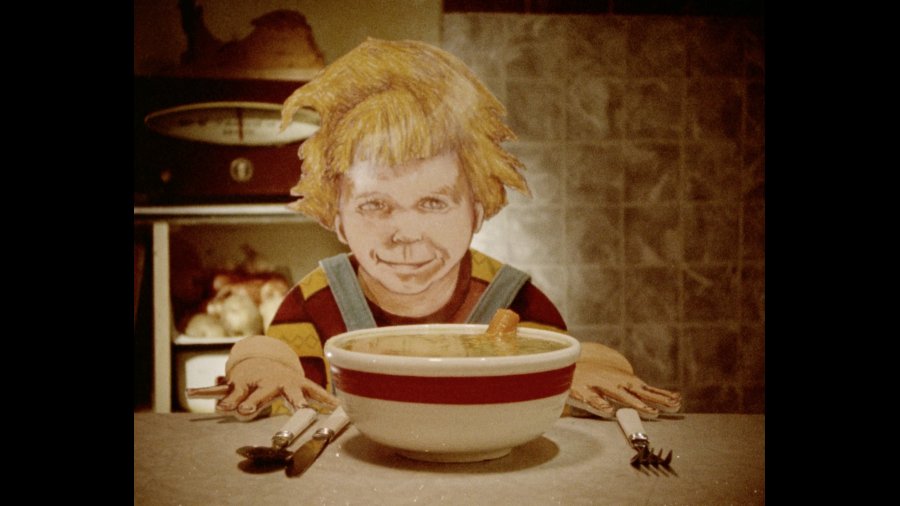 The World Premier of a dazzling new 4K restoration by IndieCollect and supervised by the filmmaker.

THANK YOU AND GOODNIGHT

The Museum of the Moving Image

Welcome and Introduction by

Much more than a mere documentary about the filmmaker’s experience of the aging and death of her grandmother, Thank You and Good Night premiered at the Sundance Film Festival in 1991, and won immediate acclaim for its combination of narrative and documentary elements and for its imaginative use of cardboard cutout characters. Amy Taubin, writing for the Village Voice, described the reaction of festival-goers: “Thank You and Goodnight choked up the self-consciously hip professional audience. Total strangers hung around the lobby long after the screening, sharing intensely personal anecdotes about death and dying.” Filmed over 12 years, Thank You and Good Night is an innovative blend of cinema verite, drama and comic surrealism featuring cutout figures of the film maker and her grandmother along with childlike manifestations of metaphysical transformations.

As a cheeky freshman bored with her classes, Jan Oxenberg started the Barnard Columbia Experimental College, which boasted Kate Millett as its first faculty member and existed as a residential program for many years. Oxenberg then transferred to California Institute of the Arts to join the feminist art program led by Judy Chicago. “I had absolutely no artistic talent,” Oxenberg says, “so I started making films.” During a summer school class at UCLA, she made her first 16mm film, Home Movie, about coming out as a lesbian. She followed those films with A Comedy in Six Unnatural Acts and I’m Not One of Them. This trilogy of films about the lesbian experience led to festival and speaking engagements around the world. With co-founder Evan Paxton, she created a pioneering educational experience, the Lesbian Herstory Exploration. After her success with Thank You and Good Night, Oxenberg was invited to develop her follow-up feature, Girlfriend Confidential, at the Sundance Screenwriting Lab. There she met TV writer-producer Jason Katims (My So-Called Life, etc.) who asked her to write for ABC’s Relativity, the series he created with Marshall Herskovitz and Ed Zwick, launching her highly successful TV career. She has been a writer-producer on multiple television dramas including Chicago Hope, Cold Case, Once and Again, Parenthood, Nothing Sacred, In Plain Sight, and Pretty Little Liars where Oxenberg developed storylines for one of the most visible lesbian characters on TV, the teenage Emily, who discovers and pursues her sexual orientation throughout the series. Jan Oxenberg is also the recipient of Guggenheim and Rockefeller Fellowships for her film work, and is profiled in the books The Celluloid Closet and The Prime Time Closet.

Thank You and Goodnight premiered at the Sundance Film Festival in 1991. Amy Taubin, writing for the Village Voice, described the reactions: “Thank You and Goodnight choked up the self-consciously hip professional audience. Total strangers hung around the lobby long after the screening, sharing intensely personal anecdotes about death and dying.”

This wildly inventive, genre-bending film makes use of cardboard cutouts crafted from old photographs and features playful skits that bring to life Oxenberg’s own memories of her grandmother.

Named a “Critic’s Choice” by the New York Times, and hailed by Quentin Crisp as “remarkable,” reviewers around the country also showered it with praise.

IndieCollect is a non-profit organization that saves and restores American independent films so they can be seen in state-of-the-art digital formats. As part of its Queer Cinema Initiative, it will be restoring all the films of Jan Oxenberg. IndieCollect’s Queer Cinema Initiative is supported by Gerald Herman and other donors. Its Film Restoration Initiative is supported in part with funds from the Just Film / Ford Foundation, Weissman Family Foundation, and by Amazon Studios. The restoration of Thank You and Goodnight has also received support from the Ravenal Foundation.

NYWIFT advocates for equality in the moving image industry and supports women in every stage of their careers. Now through June, NYWIFT presents Women Filmmakers: Immigrant Screening Series, a ten-part screening series throughout Queens highlighting stories about immigrant experiences in New York directed and/or produced by women. All events are free and open to the public. To learn more go to www.nywift.org