THE GIRL WITH THE RIVET GUN 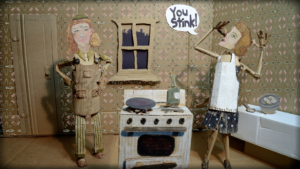 Behind the iconic “We Can Do It” poster girl, millions of real-life women shook the foundations of the American workplace during WWII – forever changing not only their own lives but the very perception of what women can do.

The Girl with the Rivet Gun is an unconventional animated short documentary short based on the adventures of three real-life “Rosie the Riveters” – Esther Horne, Susan Taylor King, and Mildred Crow Sargent. From vastly different backgrounds, these three women came of age in an America united by war but struggling with divisions of gender, economics, and race. The film weaves together powerful moments from each of their journeys of transformation – for Esther, a factory community that she loved was lost when she fought for equal pay. For Susan, when the factory doors were opened to Black women workers, learning to rivet meant earning more money than anyone else in her family. And for Mildred, becoming a Rosie meant travel ‘up North’ where she discovered Yankees weren’t so bad after all – and where she had the chance to do her part for the war by making Hell Diver bombers – one rivet at a time. Built entirely by women filmmakers – including Emmy Award-winning directors Anne de Mare & Kirsten Kelly, Producer Elizabeth Hemmerdinger, Executive Producer Laverne Berry, and Helen Hill Award-winning artist/animator Danielle Ash, The Girl with the Rivet Gun serves as an entry point to a rich, layered, and adventurous rewriting of history as herstory, inspiring conversations about working women everywhere.

Anne recently produced and directed the 2018 documentary feature Capturing The Flag, a portrait of four good friends who volunteer to do voter protection work during the 2016 Presidential election (impact campaign funded by the Carnegie Corporation of New York’s Democracy Program). She was also Co-Producer on the PBS documentary Deej, winner of the prestigious 2017 Peabody Award.

Kirsten is also a Senior Producer at Transform Films, where she focuses on developing and producing social justice documentary projects. She is currently directing Stranger/Sister, a short film following Muslim and Jewish women as they band together to combat hate through Rise & Resist campaign of the Sisterhood of Salaam Shalom (release 2020). She is lead Producer/Director on the recently released Healing the Healers – a documentary series of peer-to-peer conversations between multi-faith leaders who’ve led communities through the aftermath of mass traumas such as the Newtown and 9/11 tragedies.