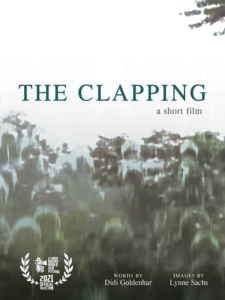 “The Clapping” evokes the inside-out of our lives in Spring 2020, sheltering in place during Covid-19’s first wave. In solitude, we relish nature’s symphony – shimmering rain and splish-splash of a thunderstorm – while longing for the hustle-bustle of performance and more populous times.

“THE CLAPPING” is part of a series created during a Maysles Center workshop in May 2020, during the first intense phase of the Covid pandemic. Filmmaker Lynne Sachs and poet Paolo Javier led an online workshop on film and poetry for 17 people worldwide. Over several months and three projects, this collective became an opportunity to be creative and find solace and inspiration while sheltering at home. “The Clapping” is one of the collaborative films that emerged from this collective.

DIRECTOR STATEMENT / LYNNE SACHS: Working with Didi was fascinating. I took the image outside, to nature and the symphony of rainfall. I had no idea that she would pull it in, pull in the raindrops and the rhythm of the precipitation into a space that was about culture and urban life. That contrast and that engagement were so exciting for me.

WRITER STATEMENT / EDITH GOLDENHAR: Lynn’s film enveloped me with longing. That large window like a proscenium stage, the continuous rain like a heavy, sparkling curtain. I found myself grieving and calling up the recent past as if recalling a dream or distant history.

DIRECTOR / LYNNE SACHS is a Brooklyn-based filmmaker whose acclaimed short and long-form films draw on documentary, essay, collage, and performance. Over thirty-plus years, Sachs has brought her feminist lens to diaristic meditations on the body, self, and family life, social and political upheaval, people on the margins whose labor supports the mainstream, and the essence of film itself. In January 2020, the Museum of the Moving Image honored Sachs with a twenty-film retrospective of her work. The series is headlined by her new movie, Film About a Father Who, an intimate, operatic portrait of her quixotic father, simultaneous with national release after screenings at the Slamdance Film Festival and the Museum of Modern Art. Lynne Sachs is also the author of Year by Year, a poetry collection weaving her personal mid-century tapestry with the skeins of history. www.lynnesachs.com

WRITER / DIDI GOLDENHAR lives in Jackson Heights, NY. Her articles and op-eds explore ideas and people that drive deep-rooted social change; her book Leveling the Playing Field, is a feminist guide to leadership. Her poems have appeared in deComp, Salamander, and The Laurel Review, among others. In 2019, she wrote and co-directed Return to Calais, a documentary juxtaposing her mother’s WW2 experience with the current refugee crisis. The film premiered in London during the UK’s Refugee Week, and in 2020 it was screened with Queens World Film Festival, Black Maria/Thomas Edison Film Festival (Global Spirit Award), and Cinema on the Bayou Film Festival (Le Train Bleu Award). In 2021 (or 2022), the film will screen at the Ethnografilm Festival in Paris.