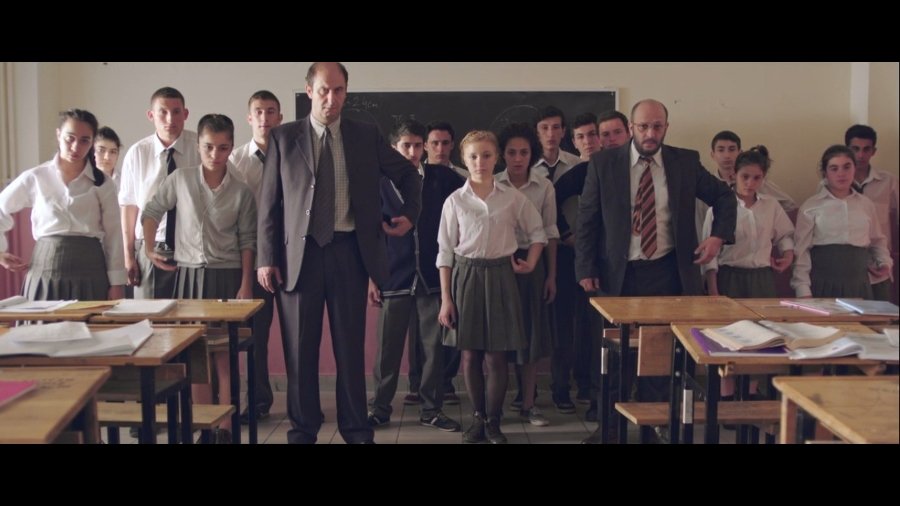 Synopsis
In this strange world; neighborhood, school, home, market place, people, everything is very familiar and belongs to this land. The film starts with the birth of a baby named Muzaffer coming into this world. What sets him apart from the others in the story’s universe is his curiosity.

Director
Alican Yücesoy was born on October 22, 1982 in Istanbul, Turkey. He is an actor, known for many popular Tv series beside numerous important movies. Yucesoy played in over twenty theatre plays during his career in different companies. He has been working in ‘Bakirköy Municipal Theatre’ as an actor for almost twenty years now. He continues his work as the artistic director since he first selected in 2015. ‘Stone’ is the first short film he directed.

I’ve always been a curious child. In general, the belief that my curiosity would get me into trouble was very common around me. Even though it wasn’t said out loud, this feeling was in the air. I guess that especially my peers are well aware of the expression “curiosity killed the cat”. I didn’t lose my curiosity when I grew up but I also remember that, within the system, the worry that something would happen to me was beginning to weigh upon me. Actually, this worry consists of a clear and implicit threat. When we meet this worry at our safest places; at home, at school, in the neighborhood, our belief in the solidarity of the core society and in the sense of trust promised within the traditional structure is shaken forever. Stone, tells the story of a child living within the neighborhood-school-house triangle who chases after a single question right from his birth until his adolescence. This is such a question that it separates Muzaffer from the warm, safe universe he belongs to and leaves him alone by revealing the latent pressure. This was the exact point that got my attention in 2002 at dear Ersin Karabulut’s “Stone Age” graphic story’s main plot. What was happening to the curious, inquisitive protagonist of the story was showing, in an ironic way, the society’s possible responses. And when I wanted to turn this graphic story into a film, I imagined to establish a uncanny cinematic universe that takes place in a world of confidence. I thought that this mismatch between form and content would recall the first times we got dismissed from the places we trusted at childhood and our first tale-like brightness that got scattered. Stone begins with the neighbors, coalesced by the excitement of the birth of a baby, who help during the birth and wait enthusiastically. In the long opening plan, the camera glides through the exterior of the house where the birth takes place and we float through the windows into the house. When we go back to the entrance of the house, the newborn baby Muzaffer has become a child and walks onto the street with his hand that his mother holds tight. The other hand holds his stone like everyone else does. The warmth of the market place they go to, Muzaffer’s school and the house where he lives with mother and his grandmother gets slowly interrupted by the responses he gets to the question he’s been asking and wondered the reason for years: “What would happen if I leave the stone?” In the opening scene of the film I dream of preparing the ground for the irony of the story with warm colors and a hopeful music design while a world is set up where everything is going fine. Besides, colors should be colder for school scenes. I always see schools as, more than neighborhoods, “places where unchanging truths are defended”. As in the example of pi number that the teacher teaches during the class. Teacher teaches pi number outside the universal acceptance which is to say as 3 instead of 3.14. This hidden detail, which I place without underlining, represents a contradictory structure in itself. In the film’s universe; I also think that the weight of the stones should also be insignificant. I want to leave naked the knowledge that the stone is just a metaphor. The stones do not need to be at their real weight or to look very realistic. Another important scene in the one where high school aged Muzaffer wakes up and puts down his grandmother’s stone. We don’t see him taking the stone from her and putting it down but we see Muzaffer’s feet leaving the room. Later in the closing scene, I want to share the fact that in the closing scene, I want to shoot the reverse plan of this scene in order to create a sense of plan as if that was taken from the eyes of the stone in the previous scene, and to share the fact that he had lived this experience before going to school. I want to shoot the part in the reverse light where the whole class throws the stones. I foresee this episode to break the warm universe of the film and to be seen as if it was part of another film. Maybe creating another dark game with shadows on the wall. At the finishing point of the film, towards the final scene I plan to show the hardness in its bare form by creating a mismatch between the content and the form while telling the hardness hidden in sympathy within a warm atmosphere. I aim to break the sympathy of the universe that was created since very the beginning in the content but not to deform it too much inform. I want to continue to look at the world with the astonished eyes and I want to make this film by the belief that we can exist by our astonishment, our differences and our curiosity. Let’s let whatever happens to us. Alican Yücesoy

STONEWALL: THE MAKING OF A MONUMENT
Scroll to top