MY SNAKE IS BIGGER THAN YOUR SNAKE 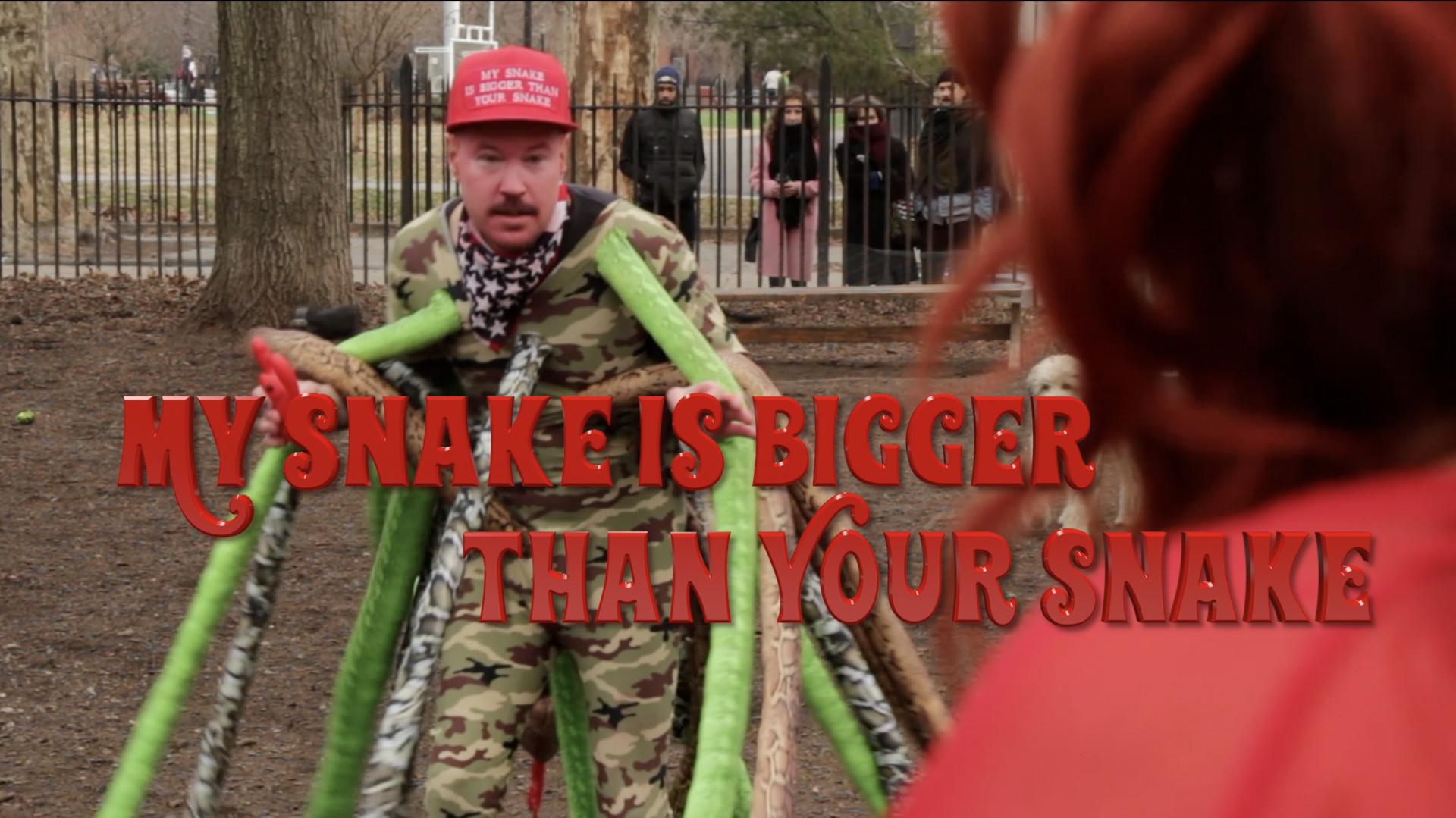 “My Snake is Bigger Than Your Snake” is a transgressive autofiction that reimagines the mourning process through sex-positive performative rituals. Defanging complex memories of the director’s relationship to her father, a hallucinatory tableau unfolds. Lead character Lobsta Queen, haunted by her dying father, watches “Dad’s Dog” resurrect him for frisky sex and a cherry pie. The Virgin Mary blesses the childhood home with orgasmic, otherworldly sex magic, giving birth to Baby Jesus in the living room. The sleazy Snake Man offers up bags of gold-wrapped chocolate coins to buy the house, only to be tortured by goddess Fortuna, a feral financial dominatrix. This fantastically costumed cast of characters serves to confront grief with humor. Casting the father in a submissive role, Goyette’s pantheon barrages him with Three Stooges-style slapstick sadism and post-Christian sexuality.

Filmmaker and performer Rebecca Goyette grew up in Townsend, a small working-class town in Massachusetts. According to the Boston Globe, Townsend has a singular distinction: It’s the state’s most statistically average town. Goyette’s father, a legendary eccentric of Townsend, simultaneously defied and assumed the town’s average standards. His interests included Chaucer and Shakespeare, playing Billy Joel and classical music on the piano, brewing beer in the basement, amateur pyrotechnics, devotion to his dog bordering on love affair, homoerotic male bonding, raunchy jokes, elaborate pranks, and throwing wild pool parties.

On the Fourth of July, 2018, Goyette’s father passed away from liver failure. Rebecca Goyette was the funeral planner. Dad’s dog Casper was an invited guest who jumped up to the casket, licking his master’s face, and sat watch. Goyette was also in charge of selling her childhood home. Rebecca stepped into the real estate office alone, to be greeted by the buyer, a man wearing a t-shirt professing, “My Snake is Bigger than Your Snake.” He was accompanied by his wife, a dog groomer with dyed blue hair, his silent mother, and stern father who wore a t-shirt stating, “Marine Corp Veteran.” Goyette knew she was in a face-off with Snake Man. She, too, had dressed with her identity on display: a New York City hard-shelled Lobsta Bitch, wearing a rhinestone-encrusted poinsettia, red dress, and a gold-chained lobster purse. It became clear that the Snake Man was uncomfortable handing over his assets to a woman. His face turned red, sweat dripping from his forehead when Goyette slipped the check briskly into her lobster purse. Goyette’s time in Townsend had reached its limit, but the inspiration of the Snake Man/Lobsta Queen face-off inspired a body of interdisciplinary artwork.

Rebecca Goyette’s films feature psychosexual improvisation to gain access to the inner workings of self and the human experience. When casting “My Snake is Bigger Than Your Snake,” she asked each performer about their specific kinks. Their preferences shaped each character’s persona in the film. Goyette sought the performers to fulfill themselves within the roleplay that served to dramatize her personal story by creating a consent-based community. Using sex play as healing, a utopic world was formed where straight folks and queer folks could play together in ways that don’t often happen.
“My Snake is Bigger Than Your Snake” examines the contrast between the artistic, sex-positive, inclusive New York City community surrounding Goyette’s art practice versus her small-town roots. The restrictions and limitations imposed on Bruce Goyette’s expression as a musician and an intellectual in Townsend are remedied by the healing bonds of Goyette’s cast and musical composers. Goyette frees herself and her father from the confines of heteronormativity and toxic masculinity that tainted both of their expressions. A rebirth of the father/daughter relationship occurs within Goyette’s artistic community.

Goyette incorporates her relationship to Goddess worship in “My Snake Is Bigger Than Your Snake.” After her father’s sudden death, Goyette embarked on a healing journey that included kundalini meditation, breathwork, tarot, and spiritual guidance. The Virgin Mary came through as a spirit guide to Goyette in an Akashic Records psychic reading. The Virgin Mary asked Goyette to artistically depict her with humor, to let people see her for who she really is as a multidimensional goddess. Goyette was awestruck, imagining how the Virgin Mary had sex with God in the abstract, no male form necessary. The Virgin Mary was a sensual human being, so powerfully receptive to the ultimate otherworldly love resulting in Jesus Christ’s birth. When a sexually charged Virgin Mary appears is perhaps the most transgressive moment in the film, reasserting a rebellious NYC art history. Perhaps most notorious was when the Brooklyn Museum’s 1999 exhibition “Sensations,” featuring Chris Ofili’s painting “The Holy Virgin Mary,” made of elephant dung, decoupaged with women’s buttocks clipped from porn magazines, was censored by Mayor Rudy Guliani. Partaking in that history of resistance, Goyette finds her own way to question patriarchy’s traditional way of worshiping Mary.

Ever since being initiated into a feminist Goddess worship circle, Goyette has maintained a reverent relationship with the Roman Goddess Fortuna, who presides over earthly prosperity, controlling our fate with one sharp turn of the wheel of fortune. In “My Snake is Bigger Than Your Snake,” Fortuna, armed with shrink wrap and a diamond-studded whip, strips the Snake Man of his cockiness and wealth. She shares good fortune with the female characters, conjuring with her incantation, “Money, money is what we want, give us your gold or your dreams will haunt.”

Rebecca Goyette’s interdisciplinary practice combines short films, performance art, costuming, ceramic sculpture, and drawing/painting to reflect on fantasy and fulfillment from a feminist perspective. Goyette’s video works and related props/objects draw from archival research, Puritan history, the annals of witchcraft, and personal narrative. She embodies a broad range of characters in an ongoing series of psychosexual films, acting as both director and protagonist in these surreal vignettes. In her body of work titled “Ghost Bitch Dramas,” Goyette recounts the psychosexual dramas of her direct ancestor, Rebecca Nurse – who fell victim to the gallows in the Salem Witch Trials. In the costumed, satirical “Lobsta Porns,” she inhabits the sadomasochistic mating dance of a female lobster. Both of these primary characters are reflective of her small town Massachusetts roots, as well as a complex relationship with her father, whose eccentricities play out in her personal mythology. Her practice explores the power dynamics and oppression inherent in gender and sexuality, celebrating sex-positivity through a comedic lens while simultaneously examining the psychology of sexual violence.

The Secret Life of Tom Lightfoot
Scroll to top