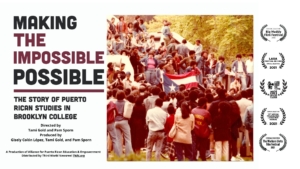 MAKING THE IMPOSSIBLE POSSIBLE tells the dramatic story of a group of students who led the struggle to win Puerto Rican Studies at Brooklyn College, CUNY in the late 1960’s. The documentary is a mosaic of voices, film footage and photographs taken by student activists and features the music by Grammy Award winners Arturo O’Farrill and Oscar Hernández. This important intergenerational story highlights how students seized the moment to build upon an already existing alliance between Puerto Rican, African American and other progressive students forged in their communities and the civil rights movement. Together they changed the face of higher education, transforming the curriculum and expanding who gets educated. The film sheds light on the 50-year history of struggle that started with the founding of one of the first Puerto Rican Studies departments in the nation, and documents the continued movement to maintain their gains.

The stories within the film awaken a new sense of self while inviting us to recognize our own collective strengths. Our history contributes to transformational and equitable changes within many sectors of society.

GISELY COLÓN LÓPEZ, Producer, was born in Arecibo, Puerto Rico, and raised in New York City.  Gisely fuses her lived experiences to collaborate and contribute to student and community driven initiatives disrupting the marginalization and minoritization of communities of color.  She is an educator and has taught for the New York City Board of Education, and the City University of New York teaching courses in bilingual education and Latino/a Studies. Gisely holds a Master of Arts from UConn-Storrs in International Studies and previously graduated from Brooklyn College-CUNY with distinct honors as the college’s Salutatorian and a Mellon Mays Undergraduate Fellow. She is an alumna of the Puerto Rican and Latino Studies Department at Brooklyn College. Gisely is on the board of the Alliance for Puerto Rican Education and Empowerment where she contributes to culturally relevant events preserving and celebrating Puerto Rican history.

TAMI GOLD is a professor at Hunter College, a filmmaker, and a visual artist. Her films have consistently been at the forefront of social justice, focusing on issues of race, gender, sexual identity, labor and police brutality. They have reached audiences near and far, airing on PBS, HBO and on television in Nigeria, South Africa, Germany, France, Turkey, Serbia, Lagos and Vietnam. Her work has also screened at the MOMA, the Whitney, The Chicago Arts Institute, The Kennedy Center, the American and British Film Institutes, Sundance, Tribeca and The New York Film Festival, and in over 150 film festivals worldwide. She is recipient of Rockefeller and Guggenheim fellowships.

PAM SPORN is an award winning filmmaker and pioneer in teaching video production in NYC high schools. Her films have screened on PBS and at US and International film festivals. Some of her films include Detroit 48202, Cuban Roots/Bronx Stories, and With a Stroke of the Chaveta. Pam has received funding and awards from Just Films/Ford Foundation, New York State Council on the Arts, National Latino Broadcasting, the Puffin Foundation and the Bronx Council on the Arts. Pam is a member of New Day Films, the Bronx Filmmakers Collective, and New York Women in Film and Television.