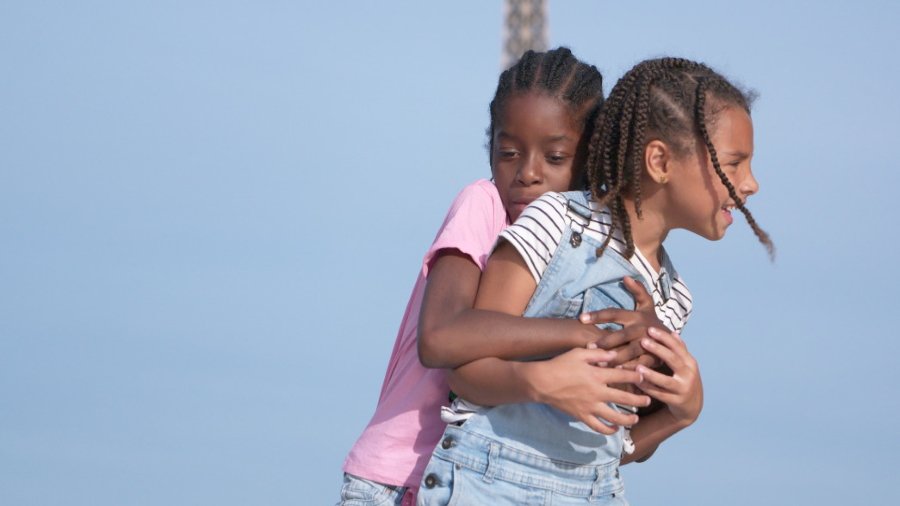 Synopsis
LOU-ANN, a shy 6 year old, meets the smart and witty CHAYA, 8, at a park in Paris. They quickly bond over their shared love of afro-electro dance and explore Paris in a dreamy adventure. However as their young friendship blossoms, it is put to the test as they face the harsh and unseen reality surrounding their lives and that of more and more kids in Paris. A look at the darker sides of the City of Light

Director
Alexia Colette just finished her second-year residency at SFFILM. She is a former reporter and documentary director for French national TV for social and economic topics, she is currently developing her first, feature-length narrative. “KOKOKIDS OF PARIS” was her first indie narrative short and shot over several days in Paris with non-actors, minimal dialogue in an impressionistic style. The postproduction was completed in October 2019 and the short has already been selected by 3 US-based film festivals. She directed in January 2020 her second narrative short, HOLY TWITCHY (working title) a “Midnight category” narrative short playing with absurdity and weirdness and inspired by her 4 years living in the “Tech city”. Previously, Alexia’s hour-long investigative film “In 24 hours flat: the secret side of package delivery”, received 1.1 million prime time viewers during its first airing on France 5 in 2013. Using hidden cameras, an Amazon warehouse was investigated, exposing its poor working conditions and draconian management. Scenes captured included, an employee fainting on camera from overwork and terrible work conditions. (https://www.youtube.com/watch?v=n8Tp8uqHlXc) Her 2015 short documentary about French nomadic Gypsies “Pas de quartier!” — toying with the double meaning in French: no neighborhood and no pity! — received an award from France’s public TV group France Télévisions for their national contest in innovative screenwriting “Filme ton quartier” (“Film your neighborhood”). (https://www.youtube.com/watch?v=yRM-CH1HdLE)

Migrant kids living in tents in Paris have sadly become more and more ignored, like transparent. They make headlines in the news as updated figure or legal status. Starting from this harsh reality, I wanted to enter into their lives through poetry and imagination in order to share with them humanity and joy. What’s a kokokid? It refers to the word Kokoko in lingala which means “Knock Knock”. In my mind, with the great alliteration of the k-, a kokokid is a kid who grabs our attention or who *SHOULD* grab our attention, i.e. homeless kids and migrant kids. But far from clichés, a kokokid is witty and can be off-the-wall, and if possible to use this English idiom, a kid who “knock them dead”! Thanks to the help of her witty and wise native American guide Chaya, the shy Lou-Ann transfigures herself by becoming a woodpecker — associated to friendship and happiness in many Native American tribes. Both are the *kokokids KNOCKING* to our mind to re-think about our society and humanity behind the “migrant issue” now universal in many countries. My other narrative projects — short and feature — also include the themes of childhood and dancing that I love to explore. Most importantly, they are questioning the ‘normopathy’ of our (insane) society i.e. when norms become dogmas imposed on all human beings — dogmas that mechanically lead to compartmentalization and also rejection of the difference — either it’s the dogmas of a financial, fascist, racist or other totalitarianism of reason that proclaims to hold the absolute truth for all human beings. I’d describe then ‘a normopath’ as someone who categorizes either people living at the margins of the society or who underestimates other people just because they are different, never questioning herself/himself or the society itself. The discriminated people can be for example nomadic Gypsies, schizophrenic dumpster divers, migrants, people of color… After an awardwinning short “No neighborhood!”, a feature doc about nomadic Gypsies in France and an episodic doc (7 episodes, 8 minutes each) about a schizophrenic dumpster diver (Link of a short presentation HERE), I wanted to portray the burgeoning friendship in Paris between a child migrant and a Romanian young Gypsy, two ‘categories’ of people the most currently discriminated in France. I also wanted to visually associate the Eiffel tower to Africa and to replace the current way of connecting people (smartphone) by DANCING on transe style. The non-professional kid actresses initially cast were Katarina, a 7-year-old Romanian Gypsy girl and Chaya, a French 8-year-old girl whose mother comes from Congo. Through their characters, the story was about experiencing the absurd reaction of adults ignoring Gypsy and migrant kids or even judging them as pariah. The first day of shooting, I learned that Katarina’s mother just got sick and that Katarina wouldn’t be able to participate to the project. My friend’s niece Lou-Ann was on the set as an extra but she was very shy. I improvised a story about a witty Chaya and a shy Lou-Ann and that’s the reason why I decided to have minimal dialogue in an impressionistic style. I’m very proud of them both and I had so much fun working with them!