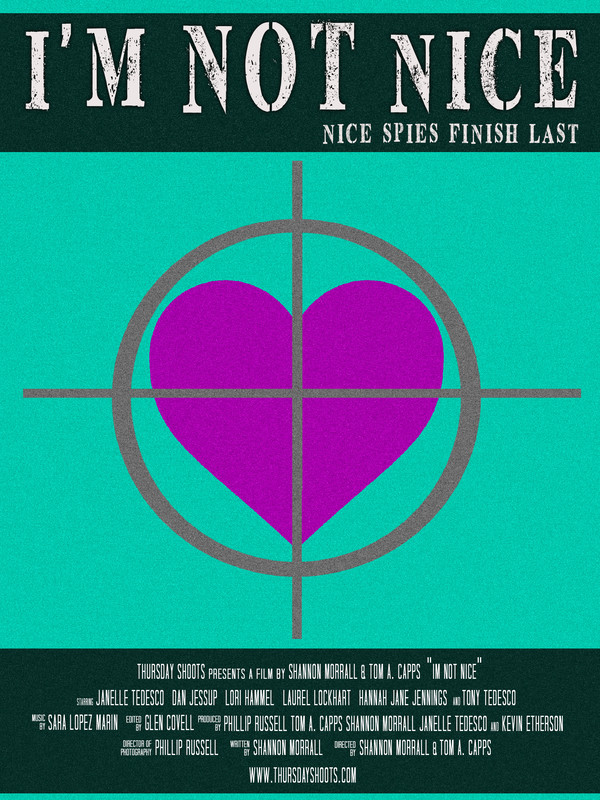 When an anti-social superspy misses her target on a hit-gone-wrong, she must face her greatest fear in order to complete her mission: small talk.

I’m Not Nice is the second short film from when Tom Capps and Phillip Russell met Janelle Tedesco and Shannon Morrall at a film festival in 2018. The two pairs each had their own films screening and decided to join forces for their first project – I’m Not Lost, where Janelle’s character Carol first appeared in a supporting role. After Janelle’s fabulous performance as the mysterious stranger in that film, Shannon was inspired to write a short that put that character in the limelight. The team had a blast filming I’m Not Nice and continue to work together to this day.

Shannon Morrall is an actor and filmmaker currently attending USC’s School of Cinematic Arts for an MFA in Film Production. Prior to enrolling she served as the Multi-media Producer for the Cinema Life Film Festival Collective’s inaugural season. Her stories tend to explore human connection, joy, and play, often through the escapism of grand adventure genres.

Tom A. Capps is an award-winning writer/producer currently based in New York. He has also worked as an editor, director, actor, sound mixer, art director, camera operator, gaffer, cook, driver, animal wrangler, basketball referee, journalist and really just too many things. He co-founded Thursday Shoots and has created content for Funny or Die, Collegehumor, truTV, UCB Comedy, Above Average, FiOS1, Child Care Works and NASA. He has an ever growing collection of cacti, two cats, drinks way too much coffee and hates writing in third person.