I WANT TO BREATHE SWEET AIR 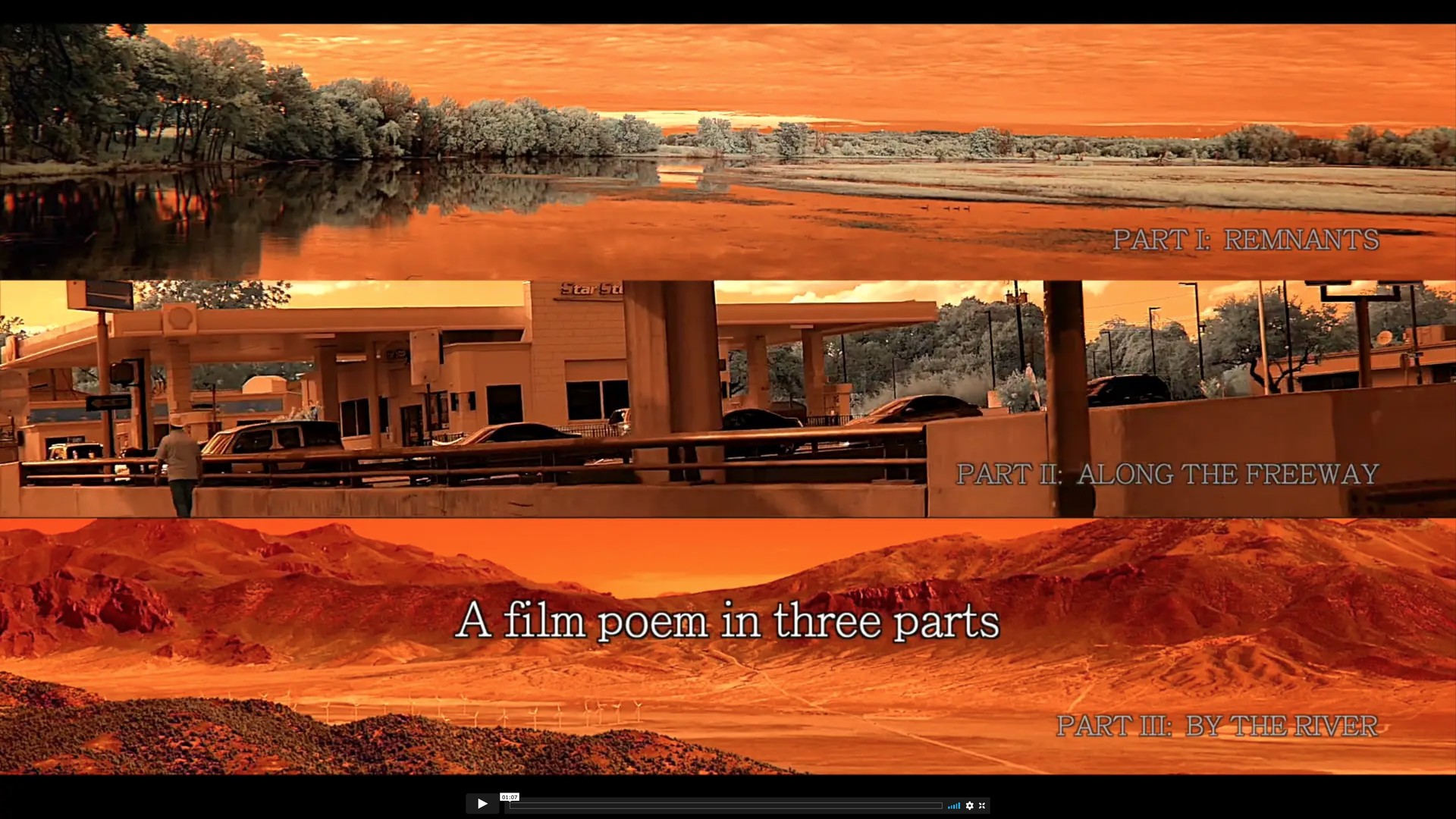 “I Want to Breathe Sweet Air,” a film poem in three parts with acclaimed writer Lucy English, is a stunning and terribly beautiful visual indictment of careless land development and the impact of climate change on the natural environment, incorporating footage shot specifically for this project as well as footage from the vast library accumulated by Outlier Moving Pictures during six years of documenting environmental destruction.

“I Want to Breathe Sweet Air,” a film poem in three parts, is a terribly beautiful indictment of careless land development and the impact of climate change on the natural environment.

Text of the poem:

Take me far away from here
to a grass meadow in the Basin.
The same flowers grow in the buffer zone
near the nuclear power plant
as the flowers in my great-grandmother’s farm.
Gallardias and Gauras.

The same birds sing in the Texas oaks;
Lark Sparrows, Warblers, Bunting.
I want to breathe the pure sweet air
rolling down from the rocky hill
and watch gold stratus clouds and cirrus strands
reflected in the reeded lake.

Along the Freeway (Part II)

I want to leave this concrete land.
On the freeway outside Austin
at one point I saw vent pipes
coming out of a hill, and that was landfill.
The landfill surrounded by starter homes.
I looked for trash along the creeks.

But micro stuff doesn’t get filtered out
in the laundry wash. Deep mining digs up the undisturbed.
The machines strip off the soil to thirty feet.
Is there anywhere we haven’t touched?
We thought there was no life in the earth’s deep crust.
The Permian Basin holds the world’s most oil.

By the river (Part III)

We’ve known all this for seventy years.
In Austin behind the Taco restaurant
by Lady Bird Lake the homeless are bedding down.
In the shallows the water foams. There’s plastic bottles,
beer cans, dirty towels and shoes.
I’ve intruded into what substitutes for homes.

Take me far away from here.
I want to breathe cool sweet air
and listen to the Black Throated Blue Warbler’s song
and smell the dry wind from the rocky hill,
and walk through prairie flowers to the lake
and sink my fingers in the mud
and wipe the mud across my face.

Lucy English was born in Sri Lanka and grew up in London. She studied English and American Literature at the University of East Anglia and has an MA in Creative Writing and a Ph.D. in Digital Writing from Bath Spa University. She has three novels published by Fourth Estate: Selfish People (1998), set in contemporary Bristol; Children of Light (1999); and Our Dancing Days (2000), set in a Suffolk commune in the 1970s. She is best known as a performance poet, first winning the Bristol Poetry Slam in 1996 and going on to tour worldwide, performing her poetry at many international festivals. Her first poetry collection, Prayer to Imperfection, was published by Burning Eye Books in March 2014. She coordinated the International Conference in the writing and practice of performance poetry at Bath Spa University and since then ran the first performance poetry module at a UK university. In 2006 she was artistic director of Apples and Snakes Poetry Tour, Exposed. In 2007, she was a finalist in the first BBC Radio 4 Poetry Slam.

She has toured Sri Lanka, India, Thailand, and Taiwan with the British Council, running workshops and performances. She has also run workshops for the Arvon Foundation. In 2010-11 she toured the UK with the acclaimed Arts Council sponsored multimedia poetry show Flash, and in 2014-5 toured with Count Me In. She is one of the organizers of ‘MIX,’ the conferences in digital writing. She is co-creator of the poetry film organization Liberated Words, which curates and screens poetry films. She created the digital poetry film project, “The Book of Hours,” which was shortlisted for the New Media Writing Award and twice longlisted for the Sabotage Awards. Two of the “Book of Hours” films won the first and second prize for the 2018 Atticus Review Videopoem Contest (https://atticusreview.org/winning-entries-of-the-2018-atticus-review-videopoem-contest/), first prize to Kathryn Darnell’s “Things I found in the Hedge” and second prize to “Que Es El Amor” by Eduardo Yague. Many of the https://bookofhours.org films have been selected by poetry film festivals, including O’Bheal, Rabbit Heart, Juteback, Zebra, and Athens. She is currently working on a new novel.

For over five years, Jack Cochran and Pamela Falkenberg have been making personal films together again under the name Outlier Moving Pictures. They hope their work will prove worthy of the name: avoiding the usual patterns and approaching their subject matter from the margins (which sounds better than saying that as filmmakers, they’re oddballs and cranks). Pam and Jack met in graduate school and made films together when they were young. Jack became a professional cinematographer working out of LA and London. At the same time, Pam stayed in the Midwest, where she was a college professor and independent filmmaker, before dropping out to work in visual display.

Their first film together, “The Cost of Living,” based on some of Jack’s short poems, screened at several film festivals, including the Buffalo International Film Festival and the Cornwall Film Festival, was nominated for two awards at the 2019 Queens World Festival, and took the award for best experimental film at the 2016 WV FILMmakers Festival. Other short poetry films have screened at the Ò Bhéal Poetry Film Festival (2016, 2018, 2019), the Juteback Poetry Film Festival (2017, 2018), the Festival Silencio (2017), the Filmpoem Festival (2017), the 6th CYCLOP Videopoetry Festival (2017), and the 6th, 7th, and 8th International Video Poetry Festival (Athens Greece). Their most ambitious film, “Teddy Roosevelt and Fracking,” about environmental threats to the wild landscapes of North Dakota, premiered at the 2018 Queens World Film Festival, where it was nominated for three awards and took the award for Best Documentary Short, followed by awards at the Go West Film Festival, the Ozark Foothills Film Festival, and the American Presidents Film and Literary Festival at the Rutherford B. Hayes Presidential Library and Museum. Their most recent poetry films, “In West Virginia,” and “Flag Country,” based on poems by Dave Bonta, have already screened at the Buffalo International Film Festival, the Small Axe Radical Film Festival, the Newlyn Film Festival, and the North Dakota Human Rights Arts Festival. Pam and Jack have just completed a new triptych with Lucy English on climate change, “I Want to Breathe Sweet Air.” They are currently at work on “Now and Then,” an experimental film based on a new collection of Jack’s poems and their first feature together, an experimental road trip/documentary essay about the loneliest road in America Highway 50 in Nevada.

Jack and Pam co-direct the films they make together, and they collaborate fully, even when they divide up the credits. Their poetry films usually start with a poem (often, but not always, one of Jack’s poems), which they think of as analogous to a script. However, when collaborating with Lucy English on “The Shadow” and “The Names of Trees,” the process was more dialectical: some images and sounds came first. Lucy wrote the poems; the poems inspired more images, and eventually, the edited film poems. For us, the exact process depends on the project and remains open to experimenting, so our body of work is somewhat disparate and hard to categorize. Some of our eclectic interests include collage, found footage, and repurposing; the film essay and film poetry; image capturing and post-production techniques that reveal what cannot be seen with the eyes alone (e.g., high shutter speeds, moving cameras, infrared photography, green screen, and digital layering); landscapes and the ways humans mark them; human rights/social justice; and postmodern melodrama.

Jack has written poetry all his life, but he never knew what to do with it until he shared his notebooks with Pam, who said, “You’re a filmmaker — shouldn’t your poems be films?” Pam and Jack both want to make lots of different kinds of films together, but Pam is especially proud to have been the one who suggested that Jack’s poems should come to life as films. They are delighted that making films of Jack’s poems has led to interesting collaborations with other poets and filmmakers.

Pam is an independent filmmaker who received her Ph.D. from the University of Iowa and taught at Northern Illinois University, St.Mary’s College, and the University of Notre Dame. She directed the largest student film society in the US while she was at the University of Iowa and ran film series’ for the Snite Museum of Art in South Bend, IN. Her experimental film with Dan Curry, Open Territory, received an individual filmmaker grant from the National Endowment for the Arts and grants from the Center for New Television and the Indiana Arts Council. OT screened at the Pacific Film Archives and numerous film festivals, including the AFI Video Festival, and was nominated for a regional Emmy. Her other films include museum installations, scholarly/academic hybrid works shown at film conferences, and a documentary commissioned by the Peace Institute at the University of Notre Dame. She is an occasional contributor to Moving Poems Magazine (http://discussion.movingpoems.com/).