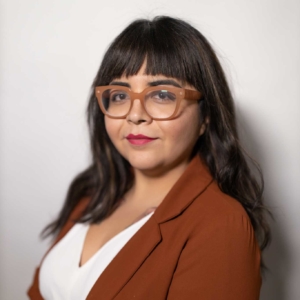 Barbara Vásconez is the Program Manager at New York Women in Film & Television. Before joining NYWIFT, she held the position of General Manager at the Quad Cinema for three years. She has worked for a variety of film festivals, including the Tribeca Film Festival, Rooftop Films, Hamptons Film Festival, Montclair Film Festival, Mill Valley Film Festival, DOC NYC, and the Nantucket Film Festival. Her spare time is spent programming panels and creating unique community engagement opportunities for the New York Latino Film Festival. In 2019, she launched and founded the Ville Film Festival in Somerville, New Jersey. In 2020, she joined the Ecuadorian Film Festival as Co-Director. Her educational goals include working to develop film programs in New Jersey that improve film education for low income students. She works on amplifying the Latinx community and speaking on important issues like immigration and minimum wage. She is committed to the importance of film as a means of community engagement. Barbara has a degree in Film and Video Production from the School of Visual arts in NYC and holds a Business certificate from W.O.R.C in Philadelphia.