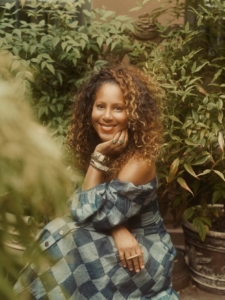 Harlem native Sade Lythcott is the Chief Executive Officer of the historic National Black Theatre (NBT), the nation’s first revenue-generating Black Arts complex and one of the longest-run theaters by a woman of color. She is the daughter of the late Dr. Barbara Ann Teer, founder of NBT and legendary champion of African-American arts and culture. As a leader and staunch advocate for women and people of color in the cultural sector, Sade currently serves as the chair of the Coalition of Theaters of Color and sits on the advisory boards of the Black Genius Foundation, Art in a Changing America, and HueArts NYC Project. Sade also co-leads Culture @ 3, an unprecedented space that brings together more than 1000 of NYC’s nonprofit cultural leaders, funders, and friends in government to navigate pressing fieldwide issues in an ever-shifting cultural landscape. In 2021, she served New York State on the Governor’s Task Force to reopen live performance statewide after pandemic-era shuttering and was chosen by New York City Mayor Elect Eric Adams to co-lead his transition committee on Parks, Arts and Culture, tasked to contribute to the blueprint for New York City’s recovery.

Sade is an activist for socio-spatial justice in the cultural arts. She is currently partnered with real estate developers for the reconception and redevelopment of Harlem’s cultural corridor on the block of 125th Street and 5th Avenue; a community revitalization and urban design project that will create a new home for NBT, affordable housing for artists, and a hub for the people and small business owners of Harlem. The multi-use arts complex is slated to open in 2026. Sade regularly shares her passion for arts, activism and spatial justice through guest lecturing at esteemed universities including Harvard, Yale, Columbia, and NYU, and she recently spoke with the NEA and at the Center of Architecture on the cultural institution’s role in spatial practice. She contributed her cultural equity ideas to The Center for an Urban Future’s City of Aspiration: 150 Ideas From New Yorkers for Building a More Equitable NYC. Her spatial activism work has been featured in the New York Times, Harper’s Bazaar, and Madame Architect. In Oprah Winfrey’s Future Rising digital series, Sade is called a “Black trailblazer moving our world forward” for co-creating spaces designed for Black joy and liberation.

A multi-hyphenate creative and artist, Sade expresses her worldview through writing, production, and design. In 2012, she wrote and produced the highly acclaimed musical A Time To Love, which garnered three AUDELCO nominations and is currently in development in partnership with the world famous Apollo Theatre. Prior to her tenure at NBT, Sade performed on several Off-Broadway stages, including appearances as Gail along co-star Chadwick Boseman in Ron Milner’s Urban Transition: Loose Blossom at the New Federal Theatre, directed by Woodie King, Jr., and as Dorothy Dandridge in Dorothy Dandridge: Before, After & Now, directed by Dr. Barbara Ann Teer. She is the recipient of numerous awards including the Key to Harlem for her excellence in the Arts, An OBIE award for Sustained Excellence in Production and Continued Advocacy on Behalf of Black Artists, and The Mark Segal Center’s Change Maker Frankie Award, amongst others. Beyond theater, Sade has enjoyed a successful career in television as an associate producer of MTV’s flagship show Total Request Live (TRL), shortly thereafter becoming a fashion journalist, designer and stylist with an illustrious clientele that includes Lenny Kravitz and Beyoncé Knowles-Carter.

Sade is a graduate of New York University with a bachelor’s degree in Art History. In her spare time, she is exploring sacred space design rooted in indigenous practice, and indulging the wonders of motherhood with her son Thelonius.