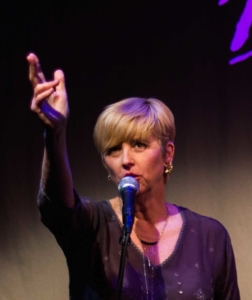 Lucy Sexton is a Brooklyn born producer, administrator, and performing artist who has worked in the fields of dance, performance, film, and public advocacy. She has served as Executive Director of the NY Dance and Performance Awards, The Bessies, building them for the first time into an independent organization. From 2013-16 she worked as a Consulting Associate Artistic Director of the planned performing arts center at the World Trade Center, conducting field-wide outreach and developing the center’s artistic mission and plan. As a dance artist she works with Anne Iobst creating and performing the dance performance duo DANCENOISE which was founded in 1983, had a retrospective exhibit and performance at the Whitney Museum in 2015, and premiered a new piece at NY Live Arts in 2018. She has also directed and dramaturged plays by Spalding Gray, Tom Murrin, Nora Burns, and Heather Litteer; and produced documentaries by Charles Atlas for the BBC and Arte. | lucy@ny4ca.org